Opens Search
Terry Peak Ski Area is South Dakota’s premier destination for a winter vacation, featuring skiing and snowboarding. The family-friendly ski resort is located in the Black Hills of South Dakota, near historic Deadwood.
The summit of Terry Peak stands at 7,100 ft tall, with the highest lift service between the Rockies and the Alps.

In 1938 the Bald Mountain Ski Club installed a rope tow up Stewart Slope, and instigated the beginning of Terry Peak Ski Area.

Back in those days, club members groomed the slope by hiking horizontally up and down with their skis to pack the snow.

Development continued and in 1985 two surface Poma lifts on Stewart Slope we replaced by the Stewart Chairlift (#4). Business was booming and lift lines were growing, so an additional Blue Chairlift (#5) was installed in 1986, parallel to the #1 Blue Chairlift going up Kussy. In1996, the Beginner Chairlift was installed for ski school classes and beginner skiers and snowboarders.

Due to the unpredictable Black Hills winters, Terry Peak began snowmaking in the 1970s. Snowmaking improvements have continued through present day, with coverage on 60 percent of the slopes. In 2002, Terry Peak acquired three wells and three holding ponds as part of the reclamation of the Golden Reward mine. The acquisition gave Terry Peak over 14 million gallons of water storage for snowmaking.

At the base of Stewart Slope, the original lodge, K-2 Bar and ski school building were replaced by the current Stewart Day Lodge in 1988. In the summer of 2001, a 3,000 square foot sun deck was added to the lodge.

The first Half-Pipe was built on the top of Holy Terror in 2000. A Pipe-Dragon grooming machine was shared with neighboring Antelope Butte Ski Area but eventually Peak purchased its own. In 2003, the first Terrain Park was implemented on Snowstorm. A lack of snow made it a struggle the first year, so snowmaking was added to Snowstorm the following year.

Heading into the 2004-05 Season, Terry Peak began its largest terrain expansion in over 25 years. New trails that were developed include North Side Glades, Ben Hur Glades, Maringo, Missing Link, and Lower Black Moon. This 100-acre expansion accommodates intermediate to expert skiers and snowboarders.

Thank You to Our Sponsors 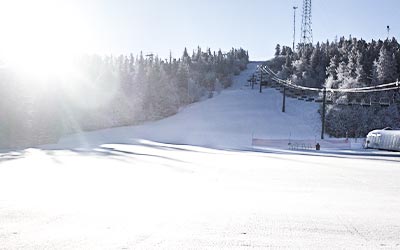 With elevations ranging from 5,900 feet to over 7,000 feet, learn more about Terry Peak.